Ajapa Yog also called ‘Dhwani Yog’, is based on the science of ‘sound vibrations’. It’s not a theory, but a definite, subjective, practical science. Ajapa Yog is the path to awaken the infinite powers within you.

The Brahma Rishis of ancient India revealed that the sounds, which caused the creation and evolution of the universe, exist in totality in human beings also “Yatha Pinde Tatha Brahmande” meaning “As is human so is cosmos”.

According to rishis, man is a miniature of the universe. All types of vibrations corresponding to that of the universe lie dormant within him. They revealed “Creation” is an activity of the vibration through the process of repulsion and attraction.

Due to ignorance, one identifies oneself with the body and senses or the mind and intellect, whereas these are only outer manifestations of the core or our true self. In reality, we are not the body or the senses; neither are we the mind or the intellect. We are the pure consciousness, which is the cause of attraction and repulsion, separate from everything.

“Union with this consciousness is the sole purpose of Ajapa Sadhana”. 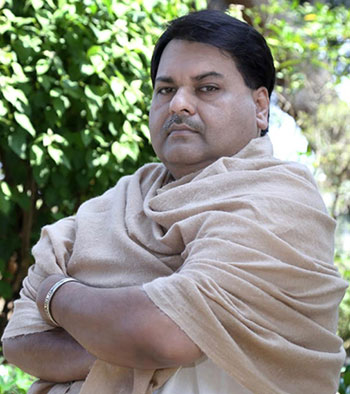 Thus began a new age of spirituality in the contemporary world. Swami Guru Prasad grew to be a powerful and graceful saint ready to help all who came to him seeking solace and true knowledge. Under his guidance the number of people seeking self-realization increased manifold globally. His ashrams in India and abroad are helping people to raise their lives to higher states of knowledge and blissful existence.

According to Swami Guru Prasad, Ajapa Yog is the greatest science on this Earth and he wants to spread this knowledge around the world for the welfare of mankind. Today there are five ashrams and several Ajapa centers, which are being maintained under his guidance. Swami Guru Prasad organizes Seminars and meditation camps on Ajapa Yog in India and abroad. 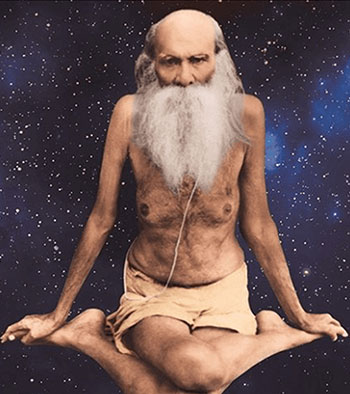 Swami Bhumanand was born as Panchanan Gangopadhyay on Dec. 24, 1873, to devout parents in the state of Bengal. He worked as an accountant for many years. He was a great scholar, but despite reading the Hindu Scriptures over and over, he felt something was amiss, making him restless and tormented. One day Swami Purnanand came to Raj Shahi to visit a disciple there. Panchanan came to meet him, and after a long talk with Swami Purnanand, he realized that at last he had met a Guru who had realized the essence of the Scriptures. He had to wait for two more years, after which finally he got initiation from Shri Swami Purnanand Paramhans.

After receiving initiation Swami Bhumanand practiced Kriya with great devotion and achieved extraordinary results in a short period of time. When Swami Purnanand became advanced in age and began the final purification process before leaving the material body, the disciples wondered who would be his successor, but were afraid to ask. Swami Purnanand looked at them and said, “Bhumanand”. On April 29, 1928, Swami Purnananda left the body. Shri Swami Bhumanand continued the Ajapa lineage from Kalipur Ashram (Guwahati) in Assam Province. Before Shri Swami Bhumanand left his material body in 1958 he gave Swami Janardan Paramhans the power to initiate others into Ajapa Yog. 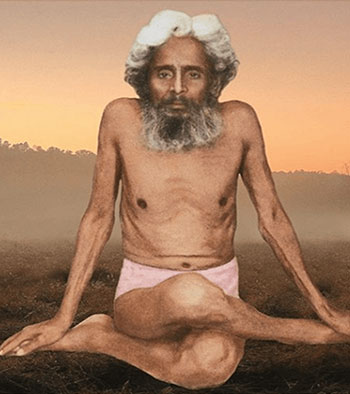 Shri Swami Janardan Paramhans was born in the province of East Bengal, India, on December 2, 1888. When he was 12 years old his father died, young Janardan ran away from home, seeking to understand the meaning of Life and Death. He wandered all over India, covering the length and breadth of the country more than seven times on foot. Swami Janardan was also a part of India’s non-violent Freedom struggle. After years of searching, he met Shri Swami Bhumanand, who initiated him into Ajapa Yog. Swami Janardan practiced this Yog with an attitude of “Do or Die” and eventually achieved complete Self-knowledge. When Swami Bhumanand left his material body in 1958, Swami Janardan carried on the lineage of teaching Ajapa to the world. Shri Swami Janardan Paramhans travelled around the world and introduced the science of Ajapa Yog to the western world. He was invited to Germany, Prague, Canada and United States to deliver a series of lectures on Ajapa. He made many disciples there and established an Ashram at California USA. He set up three ashrams in India at Rishikesh, Kanpur and Jamshedpur, one ashram in Poland and one in California USA.

Ajapa Yog is as old as the creation itself.

Since ancient times, the holy land of India has seen the birth of great sages and Gurus, who have contributed to the spreading of this unique knowledge of Ajapa Yog, teaching and training people for the welfare of mankind. Ajapa Yog traces its origin to thousands of years old Vedas & Upanishads, ancient spiritual texts of India.

Our Upanishads and Vedas reveal that Ajapa Yog was first taught to the Saptarishis by Adi Guru Mahadev himself. Lord Krishna later revealed the science to Arjuna, during the Mahabharata war. References of Ajapa Yog are found in the texts of the saints like Meerabai, Daadu Saheb, Guru Nanak Dev, and Kabir Saheb.

This unique science was kept a secret through the ages at Siddhashram (a hidden monastery in the Himalayas). It was only in 1860 that the great sage Shri Swami Purnanand Paramhans (1834-1928) brought this science from Siddhashram to the world.

In 1970 Swami Janardan Paramhans was invited to visit the ‘Academy of Science’ in Prague and subsequently to Germany, Canada, and the US to deliver lectures on Ajapa Yog. He made many disciples and later established an Ashram at California.

Today Science of Ajapa is being taught by Shri Swami Guru Prasad Paramhans (1966 – Present). Swami Guru Prasad is the living master of Ajapa Yog and teaches this science in Ajapa Ashrams and several Ajapa Centers around the world.

Shri Neeraj Goswami is an internationally acclaimed artist and a former Honorary Professor at the Delhi College of Art in New Delhi. His paintings portray a unique movement in Indian art in which art becomes a manifestation of spiritual experiences and transcendence. He is also a highly advanced practitioner of Ajapa Yog. In 2018 Shri Swami Guru Prasad Paramhans anointed him as Shiksha Guru (master of Ajapa) of Ajapa Yog Sansthan. He carries an immense responsibility of spreading the knowledge of Ajapa Yog in India and around the world. Shri Neeraj Goswami conducts intense meditation workshops at Gyan Ganj Jamshedpur and other Ajapa ashrams to teach the technique of Ajapa Yog. He also conducts Ajapa Confluences along with Guru Swami Guru Prasad Paramhans to introduce the science of Ajapa Yog in India and around the world. 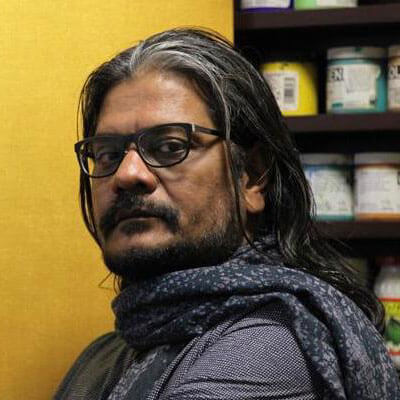 Ajapa in our day to day life

Ajapa Yog is not just a Yog, it is a way of life. Today several people from across the world are practicing Ajapa Yog and are experiencing a positive transformation in their lives.

Due to our fast pace of life, our minds are forever in a restless state producing a never-ending chain of thoughts, often with negative overtones. This restlessness is primarily due to worldly interactions and the inner state of imbalance and anxiety. This disturbed inner state is a direct result of loss of pranic energy caused by repulsion or exhalation. Ajapa Yog’s primary goal is to contain this repulsion through a method, which involves contemplation on the sounds of breath and a specific way of breathing. Though you breathe in a natural manner there is a slight change in the way you exhale. Daily practice can involve 20 minutes of meditation using Ajapa breathing technique. If one is not used to meditation, it might take some time to develop the habit of sitting regularly. Initially the person meditating is likely to be left with the feeling that he is getting nowhere but regular practice will bring results and one can experience the transformation taking place. If we practice with resolve and determination we can change our vibratory states and remain in a perpetual state of attraction throughout the day, thus ensuring a peaceful stress free life. We can understand life in its truest essence and live always in joy, free from pain and suffering.

Ajapa Meditation Centre – Gyan Ganj is a spiritual training center situated at the foothills of Dalma range near the beautiful Dimna Lake in Jamshedpur, India. Several Sadhana Shivirs (meditation camps) are conducted here during the year. Ajapa followers are trained to practice intense meditation and attain higher states of consciousness at Gyan Ganj.

Login to Ajapa
Reset Password
Enter the username or e-mail you used in your profile. A password reset link will be sent to you by email.

The construction of the Ashram building in Poland began in 1997 and was opened for disciples in 2000 . In 2001 Swami Guru Prasad Paramhans visited the Ashram for the first time . Since then Guruji has been visiting the ashram regularly .

There are guru temples built-in all Ashrams in honor of the Ajapa Yog masters. Ajapa followers from all over the world visit the temples during Ajapa Utsav and Sadhna Shivir.

Standing tall on the pinnacle of Nav Rishi Temple at Ajapa Yog
Ashram in Jamshedpur, Avatar is a symbol of harmony, divinity and the ultimate goal of life.

Nav Rishi temple situated in Jamshedpur was built in 1976 by Swami Janardan Swami at Dimna Ashram and re-inaugurated by Shri Guru Prasad Paramhans on 24th December 2006. The temple is built in honor of Brahm-Rishis, the fist Self-realized men who spread this knowledge of Ajapa Sadhana to the world.

This ashram was established in 1977 in California North America. The ashram is located between Sacramento and Lake Tahoe in the foothills of the picturesque Sierra Nevada Mountains.

Ajapa ashram established by Shri Swami Janardan Paramhans in 1955 situated in the foothills of Himalayas, just beside the holy river Ganga in Rishikesh (Uttaranchal)

This is the first Ajapa ashram and was established by Shri Swami Purnanand Paramhans in the year 1899.